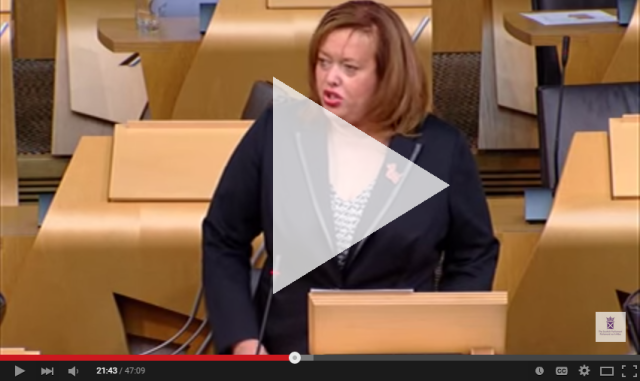 Glasgow Labour MSP Anne McTaggart has thrown her support behind calls for a statutory code of practice for pub companies in Scotland.

Ms McTaggart made her calls during her fellow Scottish Labour MSP Paul Martin’s member’s business debate at the Scottish Parliament on 20th May.

The debate followed a move by MP’s at Westminster to amend the Small Business, Enterprise and Employment Bill to introduce a code of practice designed to govern the relationship between pub companies and their tenants in England and Wales.

It is estimated that there are more than 4,600 pubs in Scotland and that more than 20% of them are tied pubs owned by pub companies. CGA Strategy last year surveyed Scottish tied-pub tenants for the Campaign for Real Ale. They found that  66% of the respondents earned less than £15,000 per annum, and 10 %of them earned less than £10,000 per annum; that 74% of respondents considered themselves worse off as a result of the tied model; and that only 3% had a very positive sentiment for the tied-pub arrangement that they have with the pub companies.

Ms McTaggart highlighted the Tennent’s training academy in Glasgow, its recently opened conference facilities at the Wellpark brewery and the Drygate bar as examples of the great benefits that the pub trade can bring to the Scottish economy if it is allowed to flourish.

“We all agree that Scotland needs a thriving business sector in order to grow our economy, but it simply cannot be fair that hard-working, honest publicans work day and night without receiving the benefit of a pay cheque that befits their efforts. I believe that enacting legislation similar to the legislation that has been brought in in England and Wales to protect rent-tied tenants will certainly help, although it will not solve the problem completely.

“The introduction of a statutory code of practice that encompasses fairness and lawful dealings will provide guidance, support and clarity to the industry in Scotland. A Scottish adjudicator should also be established, which should have the power to arbitrate in disputes between pub companies and tenants. It should provide a fast, low-cost and effective means of redress for tied tenants in the event of code breaches, and it should have the power to impose financial penalties.

“For me, the issue is quite simple: too many of our pubs in Scotland are closing down and many that have not closed are only a few steps away from disaster. It is in the interests of everyone in this chamber that our pubs do well.”

You can read Ms McTaggart’s speech in full here.

This entry was posted in Uncategorized and tagged Scottish Parliament, Speeches. Bookmark the permalink.