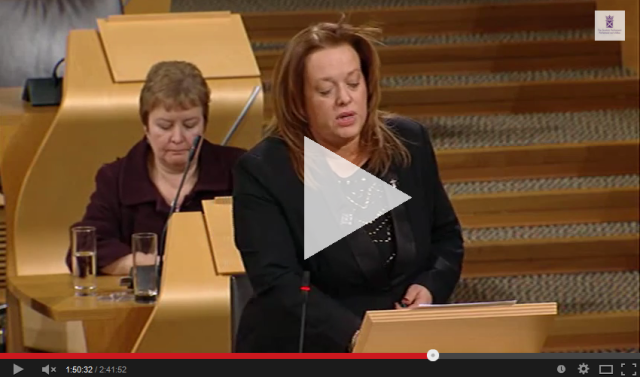 Glasgow Labour MSP Anne McTaggart has urged the Scottish Government to explain why the Scottish welfare fund was so underspent.

Ms McTaggart made her call during a debate at the Scottish Parliament on the Welfare Funds (Scotland) Bill on Tuesday December 16th. She voiced her broad support for the general principles of the Bill but also raised some reservations.

Ms McTaggart, in agreement with a report published by Heriot-Watt University, spoke about the need for greater awareness of the fund through information materials provided to local government departments, third sector agencies and Jobcentre Plus. She also stressed the need for guidance to be issued to staff on awarding discretionary grants in order to ensure that people are treated equally across the country.

Speaking in the debate Ms McTaggart said “The Welfare Funds (Scotland) Bill is vital to many of my constituents in Glasgow. Although I am broadly in agreement with the aims of the bill, in order to ensure that the SWF operates properly in the coming years, the Scottish Government must clarify why there has been a repeated underspend. It should also address the concerns that I have expressed, in order that the bill fulfil its principal aim, which is to provide through crisis grants a safety net for people on low incomes during a disaster or emergency.”

This entry was posted in Uncategorized and tagged Scottish Government, scottish lab, Welfare. Bookmark the permalink.