Over 1,000 Children in Glasgow Homeless This Christmas 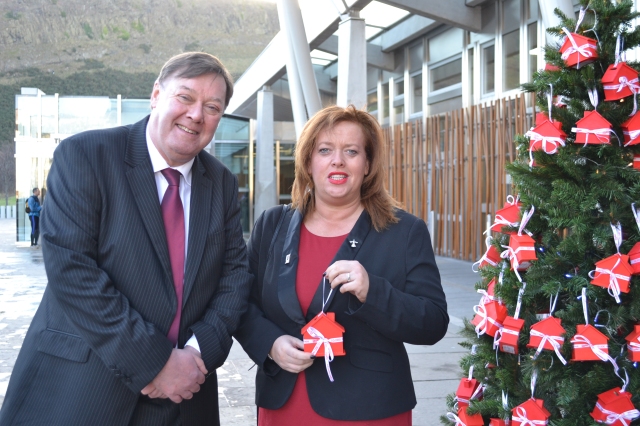 Over 1,000 children in Glasgow will face the winter in temporary accommodation as Scotland faces its worst Housing Crisis since the Second World War.

The shocking figures were announced by Shelter Scotland this week, showing that over 4,000 children in Scotland will be homeless this Christmas. The charity said a shortage of affordable social housing is the root cause of the problem.

This coincides with the launch of Shelter’s Christmas 2014 appeal which Ms McTaggart supported at the Scottish Parliament on Tuesday (2nd December). Campaigners, MSPs and primary school pupils joined together to decorate a tree with little red houses to highlight the issue.

The amount of children facing a homeless Christmas is enough to fill the Scottish Parliament chamber 32 times over and equivalent to more than two homeless children for every primary school in Scotland.

Glasgow Labour MSP Anne McTaggart said the figures had to act as a wake up call to the Scottish Government that Scotland is facing a social housing crisis, as nearly 180,000 people in Scotland sit on social housing waiting lists.

Ms McTaggart has called for the Scottish Government to back Scottish Labour proposals for a National Housing Action Plan.

Ms McTaggart said “It is an absolute scandal that any child would spend Christmas homeless, but over 4,000 is nothing short of a national disgrace.

“With over 1,000 children in Glasgow facing Christmas in temporary accommodation it is time that the Scottish Government woke up to the fact that  Scotland is facing a full blown  housing crisis not seen since the Second World War.

“Despite this crisis 23,000 homes across the country are lying empty, and the Scottish Government’s own figures have shown a 22% drop in social house building in the last year.

“This cannot continue to happen. If we are serious about fighting poverty and building a better country for every child in Scotland we need a National Housing Action Plan to deliver more social housing where it is needed, to those who most need it.

To help support Shelter Scotland, people can visit shelterscotland.org or text to SHELTER 70123 and donate £3 to support their work.

You can donate to the Shelter Scotland Christmas appeal here

There are an estimated 23,000 empty properties in Scotland.

This entry was posted in Uncategorized and tagged Housing. Bookmark the permalink.