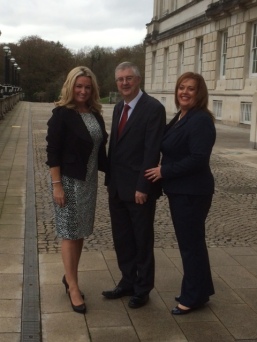 With Jo-Anne Dobson and Mark Drakeford

Ms McTaggart met with ministers and politicians at Stormont including Mark Drakeford AM, Minister for Health and Social Services at the Welsh Assembly, Jo-Anne Dobson MLA of the Northern Ireland Assembly, and leading clinical professionals to discuss the impact that organ donation reform would have on the rest of the UK.

Figures announced at the event highlighted that while improvement has been made, the UK still has one of the lowest family authorisation rates in Europe at 59 per cent.

The Welsh Assembly has already legislated for a ‘soft opt-out’ system, which will come into force in December 2015. Both Anne McTaggart and Jo-Anne Dobson are proposing similar legislation in Scotland and Northern Ireland respectively. The public consultation on Ms McTaggart’s proposed bill closed last week and the responses are currently being studied.

“I’m delighted to be in Belfast today to meet with my parliamentary colleagues from across the UK to discuss the vitally important issue of organ donation reform. What is clear is that we are united in our desire to save people’s lives through the introduction of a ‘soft opt-out’ system of organ donation.

“It has been really encouraging for me personally to be able to hear both Jo-Anne Dobson and Mark Drakeford speak so passionately about the issue. The National Assembly for Wales has been a leader on this topic so it’s invaluable to be able to hear from Mark. In addition, Jo-Anne has a very personal and moving story behind her desire to see organ donation reform which really brings home the necessity of legislation. It’s important to learn from each other’s experiences as there are people across the UK who are depending upon this legislation being successful.

“I spoke today about John Johnstone, a friend from Glasgow who was on kidney dialysis for five years and suffered terribly until he received a donation in March this year. His life has been transformed and both he and his family can now live safe in the knowledge that John is healthy and living a better life. Stories just like John’s are replicated across the country and it is with these people’s stories in mind that we must continue to fight for organ donation reform. With three people dying every day waiting for a transplant we must take action and support the adoption of opt-out systems throughout the UK.”

“Sadly one in three people with cystic fibrosis who need a lung transplant will die on the waiting list which is why the Trust is campaigning for a change in transplantation guidelines. This vital event shows that we are one step closer to making soft opt-out a reality across the UK.

“The Trust would now like to see the rest of the UK to follow Wales’s lead; this will result in more life-saving transplants for people with a wide range of conditions, including those with cystic fibrosis.”

“This is an historic occasion and it is with immense pride that I host Minister Drakeford AM and Anne McTaggart MSP, along with leading clinical professionals at Stormont.  Together we will be representing the three regions of the United Kingdom who are moving toward a soft opt-out system.

“Organ donation is an issue which leaves few lives untouched and one which has touched my family.  I know how organ donation saved my son’s life and that’s why I passionately believe in making donation the norm in our society, rather than the exception.

“I am progressing an organ donation Bill at Stormont which has family consent embedded at its very heart.  Having that conversation with your loved ones, and making them aware of your wishes is the best of ensuring that they are honoured.

“It is also poignant that Rebecca Barr from Dollingstown will be speaking to us at the event on behalf of her family on the fourth anniversary of her sister Charlene’s death.  Charlene’s story and the inspirational work which she did to help children in Uganda has left a lasting and living legacy in her memory.”

“From December 1, 2015, Wales will become the first country in the UK to introduce an opt-out system for organ donation. This is an important piece of legislation, which will affect nearly every adult in Wales and has the ability to save and transform nearly 50 lives a year.

“While nine out of 10 people in Wales support organ donation, only around a third of people are on the NHS Organ Donor Register. At the same time, someone in Wales dies every 10 days while waiting for an organ transplant. As a nation, we believe this is a situation that we cannot allow to continue.”

This entry was posted in Uncategorized and tagged organ donation. Bookmark the permalink.